Sometimes, the world is butt ugly. Eleven members of a synagogue dead in Pittsburgh while attending a bris, two African-Americans killed while grocery shopping in a Kroger’s, suspicious packages sent to politicians who disagree with the President.

Even before any of these events took place, I was feeling the oppression of living in New York City which, yeah, can be great but can also be an ugly, coarse place. I was working on a story at Criminal Court, a monolithic monument to all that is wrong with New York. Long security lines, frightened and nervous suspects and jurors unsure what’s in store for them, and burly court officers trying to make the best of a bad situation weighed down by bulletproof vests and a well-earned sardonic outlook on life.

These days, the streets around this gray building–which by the way is connected by skybridge to a jail called The Tombs (get the picture?)–is swimming in construction. I’m not even going to mention the subway system that got me there. Even on its best days, the subway is an ugly parade with peeling paint, moldy, water-streaked walls and commuters right out of a Diane Arbus photo. No one looks very happy.

Having said all this, I’m an optimist by nature so, when I feel overwhelmed by the only city I’ve ever lived in, I know what I need–I need beauty. Sometimes, it’s getting out the city and seeing nature and sometimes, it’s Paris! But last week, I chose to visit the Guggenheim Museum where I’d not been for ages. 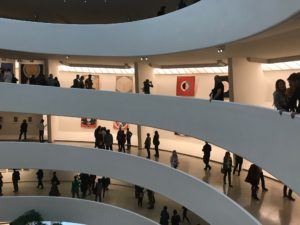 Someone on Twitter had posted something about the museum’s current exhibition–wildly designed abstract paintings by Hilma Klint created at the turn of the 20th century. They were so arresting and colorful, so utterly different than my sad surroundings, that I went.

Klint was a Swedish feminist artist who took her art very seriously. She believed there was a world beyond this one and attended seances regularly. She believed in mediums and a lot of her art, she wrote in meticulous journals, was inspired by spiritualism.

Her greatest work “The Paintings for the Temple”–created around 1906–is breathtaking in color and design and way ahead of its time. You can read the above link which will tell you much more about Klint than I could. All I can say is that the exhibition did the trick. It showed me some beauty and art in a world sorely in need of it at the moment. 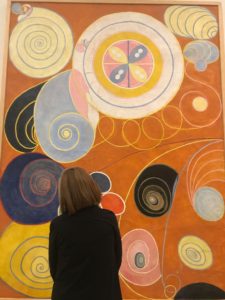 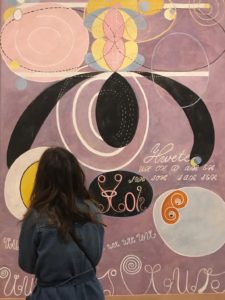 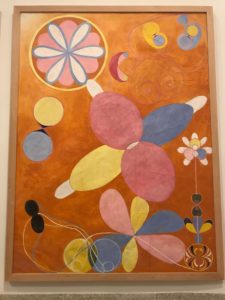 Klint lived in a different country and time but, standing in front of her art, I felt as though she was speaking to me from the beyond. I connected with her work–inspired by the unseen world and so far out of my day to day realm. If an artist can create works of this magnitude, all is not lost. Believe it. 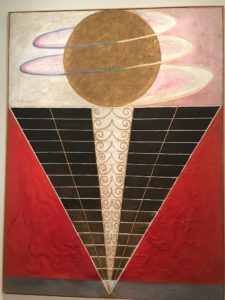 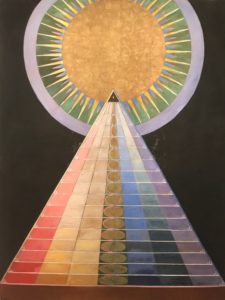