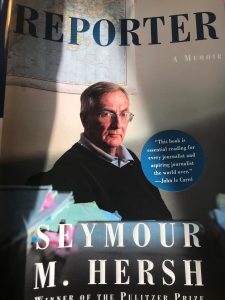 [Note: A few years back, Ted Sturtz, a former investment banker and lover of books, was dismayed by all the newspapers dropping their book review sections. Feeling there was a place online for thoughtful book reviews, he created the website New York Journal of Books and somewhere along the line asked me to participate which I was happy to do. Here’s my latest review for them. I hope you take a look at the website; there are a lot of great reviews and books featured. Thanks!]

This memoir is filled with the type of jaw-dropping anecdotes one might expect from a purebred reporter such as Sy Hersh but one story stands out, precisely because it demonstrates how deeply society has changed over the past 40 years.

The year was 1974 and Richard Nixon had just resigned the presidency. Seymour Hersh, then working for the New York Times, got a tip that Nixon’s wife Pat had been taken to an emergency room with serious injuries. A tipster connected with the hospital called Hersh—who was known to do anything to run down a good story—and told him that Pat had informed the ER doctor that Nixon had hit her.

“I had no idea what to do with this information, if anything,” writes Hersh in his autobiography, “but I went along with the old adage from the City News Bureau, ‘If your mother says she loves you, check it out.’”

Hersh called John Erlichman, who had been one of Nixon’s most trusted lieutenants. Erlichman matter-of-factly told Hersh that he knew of two other incidents when Nixon beat his wife, once when he was president. [continue reading]